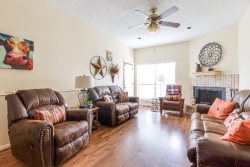 Zink Haus is a beautifully renovated historic collection of three separate and totally independent luxury villas with sleeping accommodations from 2-16 guests. In the heart of historic downtown New Braunfels, Zink Haus Villas are within walking distance of several restaurants, bars, boutique shops, the Farmers’ Market, the Brauntex Theatre, the Comal River Tube Chute, as well as Schlitterbahn Waterpark and to the famous Wurstfest grounds.

The original owner of the property, Francois Guilbeau, Jr (1813-1879) was remarkable in many respects – as a successful entrepreneur, and businessman, but also as a frontier and even international hero. He was known as quite the marksman in the San Antonio area in the middle 1800’s because it is documented that he was able to cut a playing card in half with a dueling pistol while the card was held edgeways between the fingers of an assistant.

But his international importance was his role with the horticulturist from Texas who were known to have “saved the French Wine Industry “ in the 1800’s.  In the 1870’s the French wine industry was getting wiped out from phylloxera, a disease that affected the roots of the vines of French wines, and one in which there was no known cure or resistance in France.  It was known that the native Texas Mustang grapes were resistant to the disease.  Texas horticulturist Matthew Knox and viticultralist Thomas Volney, where able to harvest cuttings of the Mustang vines.  As the businessman, it was Gilbeau who was able to box, warehouse and ship tons of the cuttings from Galveston to France.  The Texas cuttings were introduced to the French wine growing regions and the French wines were grafted to the hearty Texas root stock.  Hence the French wine industry was saved and flourished, by few good Texans.

Zink Haus Villas are premiere luxury New Braunfels vacation rentals, hence the names Cabernet, Merlot and Charonnay in respect to the history in wine,  that can be rented individually for 2-6 guests or combined together to accommodate up to 16 guests. Ideal for a romantic couples getaway, a group get-together, family or corporate retreat or intimate wedding, Zink Haus is a private oasis of excellence and refinement.

Zink Haus has a magical walled garden behind the two front villas. A gate opens to a lush courtyard, covered pavilion and several outdoor dining areas. Guests can enjoy the outdoor grill, music in the courtyard and covered pergola.

There are no Guest Reviews at this time. Please try back soon.

Jump to a Rental